45 kilometers away from Logroño, Anguiano is considered to be the gateway to Las 7 Villas although it does not belong to the same historical region. It is a stockbreeding town whose biggest touristic attractive lies on its traditional Danza de los Zancos: eight young men from the town go down the “Cuesta de los danzadores” on half-meter-long stilts. This spectacular dance, which has been documented for 400 years, takes place twice a year: in the town’s festival, which is celebrated in honor of Santa María Magdalena (July 22nd) and in Gracias, the last weekend of September.

Anguiano’s urban landscape is divided into three districts with different architecture: Mediavilla, which is the main core of the town with its lordly buildings; De las Eras, which is destined to farming labor; and De las Cuevas, on the left bank of the river Najerilla and at the foot of the imposing cliffs nearby. The architecture in this district is more rustic and offers impressive sights of the whole town.

Apart from the Monastery of Valvanera, other highlights of its artistic patrimony are the parochial church of San Andrés, which was declared National Artistic Monument in 1982. Located in the Mediavilla district, it was built in rough ashlar and masonry between the 16th and 17th century. Once inside, its highlight is the main altarpiece. Of all towns in Alto Najerilla, Anguiano is the one which offers more services.

Located in the heart of the mountains, 14 km far from Anguiano and surrounded by deep forests, the monastery of Valvanera guards the statue of the Virgin of Valvanera, La Rioja’s patron Saint. It is considered one of the oldest sculptures of Maria in Spain. Its existence has been traced back as early as the 11th century and it has been related to the pre-Romanesque monasteries that already existed in La Rioja. The monastery has gone through many reforms and even been in ruins before, due to the Napoleonic Invasion and the Mendizabal’s Disentailment. During the years the monastery was neglected, the precious statue was taken to the church of San Miguel in Brieva to keep it safe, as can be read in the plaques of gratitude found in Valvanera and Brieva. Nowadays, the monastery’s interest lies on its late Gothic stile, a façade of pointed archivolts and a beautiful outer gallery with beautiful sights.

Near the church, there is a Renaissance hostelry that has been recently restored.

One of the most typical products is the liquor made by the monks in Valvanera, because of its Benedictine origin, and honey. The statue is usually pictured as surrounded by bees in churches all over Spain and South America, where it is widely worshipped. Many towns in La Rioja march one day to visit their patron, a tradition that has been kept for hundreds of years.

There are several routes starting from the monastery: to the beech forests in Tobía, to the Pancrudos mountains (higher than 2000m), to Anguiano, etc. This landscape is a fundamental part of Valvanera. 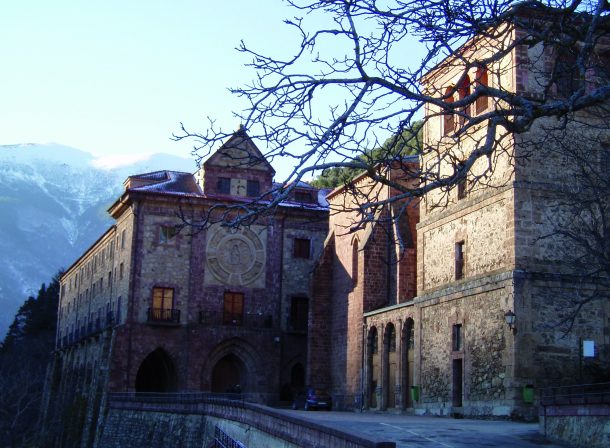