69km away from Logroño, Viniegra de Arriba is at 1189m highest of these 7 villages.

Two rivers flow across the town: the Ormazal and the Castejón. It is one of the villages that has preserved best its popular architecture, its stone-paved streets and the charm of such a small town, with cows and sheep wandering in the streets. For that reason, it maintains the same charm it had in the days of our ancestors.

Viniegra de Arriba borders with Soria and is located at the shadow of the peak Urbión (2228m), which gives it a rustic climate.

Viniegra de Arriba is one of the last towns in La Rioja that still practices transhumance, thus the Cañadas that still go across Las 7 Villas.

A few meters away from the urban center, in Collado de San Miguel, there is a Roman necropolis.

This municipality is perfectly suited for hunting, fishing and trekking.

The parochial church of La Asunción, the chapel of Magdalena, San Vicente and the fountain with its three canes make the patrimonial wealth of this village, together with its solid stone buildings, some of which date from the 17th century.

Most Beautiful Village in Spain since 2019. 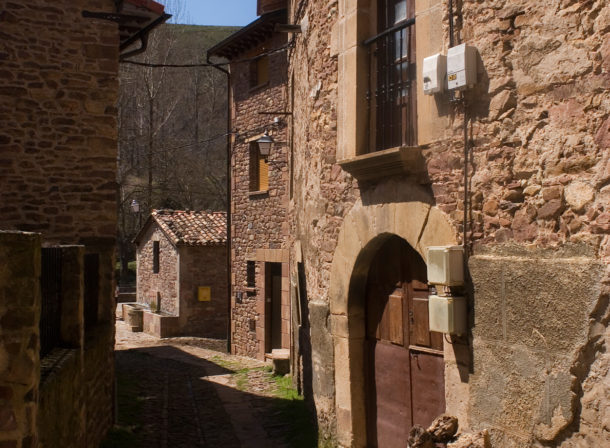