72km away from Logroño and 950m high in the mountain, Mansilla de la Sierra is located in the subregion of Alto Najerilla. With an area of 121.2 km2, its terrain includes the hamlet of Tabladas besides the village.

The crisis of the transhumant activity and the construction of a reservoir resulted in an important decrease of the local population.

All that is left from Mansilla’s old town is the chapel of Santa Catalina, which was not covered by the waters of the reservoir because of its altitude. The excavations conducted between 2017 and 2018 show that it spreads way beyond the modest hermitage that stands on the mountainside. Remnants of the Romanesque church it belonged to from the 13th century to its abandonment when the villagers moved to the valley have been found recently.

The church sits on the vestiges of a previous parish and “an older building which has not been dated yet, but judging by the ceramic materials that have been found, it might date from the 4th or 5th century”. This reveals Mansilla used to have a relevant economic and social vitality.

In 1960, when the dam was built, the villagers of Mansilla moved to their new town. This village is the less typical of Las 7 Villas, with big, white attached houses.

In autumn and winter, the waters of the reservoir go down and show the houses and streets of the older Mansilla. In Casa de las 7 Villas, an exposition titled “Mansilla, la memoria sumergida” (Mansilla, the drowned memory) can be visited. It compares the past and present of the town, with 3D pictures.

The reservoir that made the old village disappear in the past is what fives the town possibilities for the future nowadays, as an incomparable landscape for all sports related to swimming, rowing, fishing, etc.

Mansilla is located in the San Lorenzo and Urbión peaks, the tallest in La Rioja, and its steep mountain landscape offers many possibilities to the lovers of all mountain sports.

Its large mountains and abundant rivers make Mansilla the ideal place for hunters and fishers. 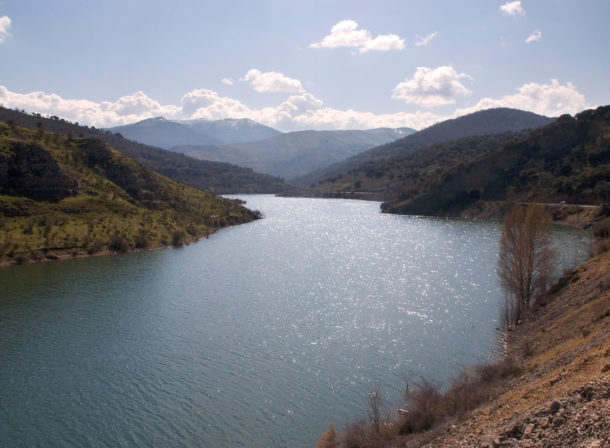