Ventrosa appeared in Fernán González’s vow in 927. It was originally called “Bendosa” and associated to Canales de la Sierra.

In 1366 it was included among the localities that formed the “Manor of Cameros”, which was given from Enrique II de Trastámara to Juan Ramírez de Arellano as a reward for his collaboration in the fight against Pedro I the Cruel.

After the disappearance of the manor in 1811, it became an independent village from Soria, until the province of Logroño was created on November 30th 1833.

74kms away from Logroño and 1003m high, in the subregion of Alto Valle del Najerilla, it encompasses an area of 72,84km2. The rivers Najerilla and Ventrosa go through the town, which also presents a steep topography, with peaks as high as the Cuervo (1877m).

After the sixties, the population of the village started migrating due to a wool-bearing economy. Many flocks of sheep, herds of cows and over a hundred mares.

We can visit the church of San Pedro and San Pablo, from the 18th century, in which there is a magnificent altarpiece. The chapel of Christ, a modest and rustic building.The chapel of Villa Rica, on the left bank of the river Najerilla. The little clock tower. The Puente de Hiedra (Ivy Bridge), located between the chapel of Villa Rica and Venta de Goyo, over the river Najerilla. From its civil arquitecture, we can highlight some buildings from the 17th and 18th centuries, with coats of arms in their walls. These received in 1971 the National Award for Town’s Embellishment.

Its wild landscape is particularly attractive. The visitor, walking through the road of the Viniegras, will come across beautiful landscapes full of boulders, forests, prairies and the river Ventrosa, which flows between the poplar grove.

In the last years, Ventrosa has experienced an increase of its rural tourism. 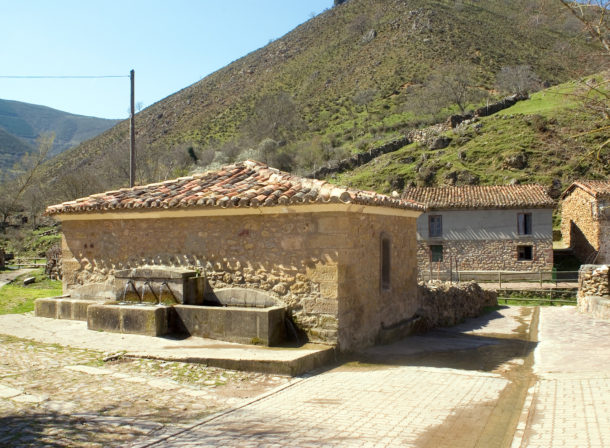